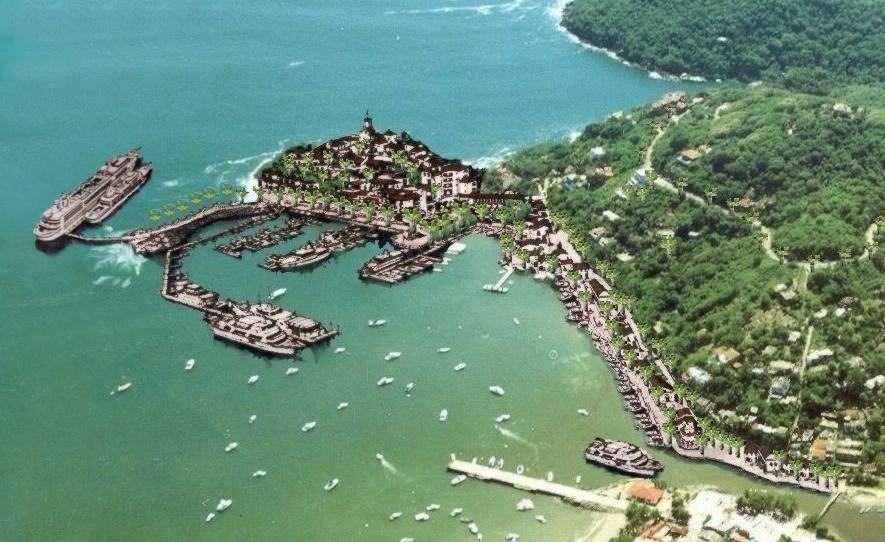 In case you missed it, this photographic rendering from Puerto Mío's website apparently shows a large section of Zihuatanejo's bay and coastline privatized to form a marina belonging to Puerto Mío. Notice the too-high-density development on that fragile peninsula (that should have been better protected and preserved) as well as the omission of Playa Almacén just above the small white T-shaped pier where the currently closed gas station is. Most obvious at the end of their elongated jetty is their cruise ship pier, a project they have been pushing for years. If their currently shorter jetty blocks currents that used to clean the section of the bay fronting town and contributes to the silting in of the bay and the elevated levels of pollution, one can easily imagine what a larger jetty would do. Also notice the coastline along El Almacén with all wharf instead of its natural state. Apparently, nature is an enemy of these developers.

What's missing in the green hill in the background are all the scars of new roads they have dynamited into that hill for their newest development called Monte Cristo, which is without a doubt the ugliest development ever built along Zihuatanejo's coastline after the Villa Vera. They also have attempted more than once to modify (allegedly in flagrant violation of the law) the small pebble beach at Contramar by covering it with sand, which obviously hasn't worked but has instead contributed to the silting in of that section of the bay, which is also apparently suffering from erosion and pollution allegedly generated by their development and for which they are currently under investigation. Of course no one really expects them to be sanctioned since they just keep getting away with one thing after another. There is supposed to be a court ruling against them ordering the removal of the jetty, which obviously they still haven't complied with years after its emission.

I and a great deal of my fellow Mexican citizens and Zihuatanejo residents believe this is a very harmful type of development for Zihuatanejo; one that, due to the enormity of its selfish greed and alleged violations of law as well as damage to our fragile ecology and flagrant defiance of the good people of Zihuatanejo who would prefer to see the bay and its hillsides better protected and preserved, deserves to be boycotted until they can show much more respect for Zihuatanejo, its ecology, its laws, and its people. Obviously there is collusion with certain public servants who have allowed this travesty against Zihuatanejo to get this far out of hand, and they too deserve to be sanctioned for their actions.