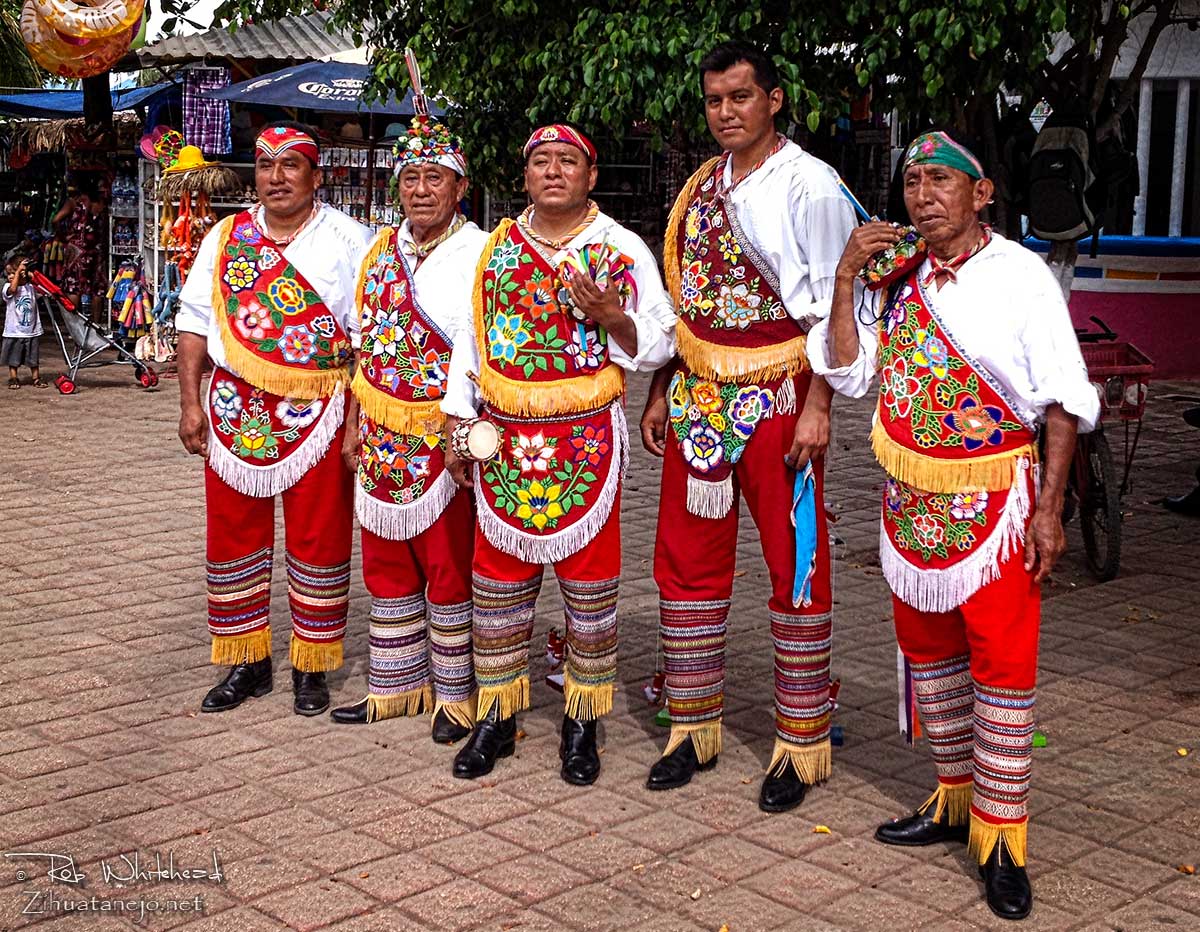 These gentlemen are "Hombres Voladores de Papantla", and they put on a spectacular show at Playa Linda where they climb a tall poll then jump off, flying around and around with ropes tied to their ankles that unwind with each revolution until they reach the ground. Please tip them generously if you go to see them. 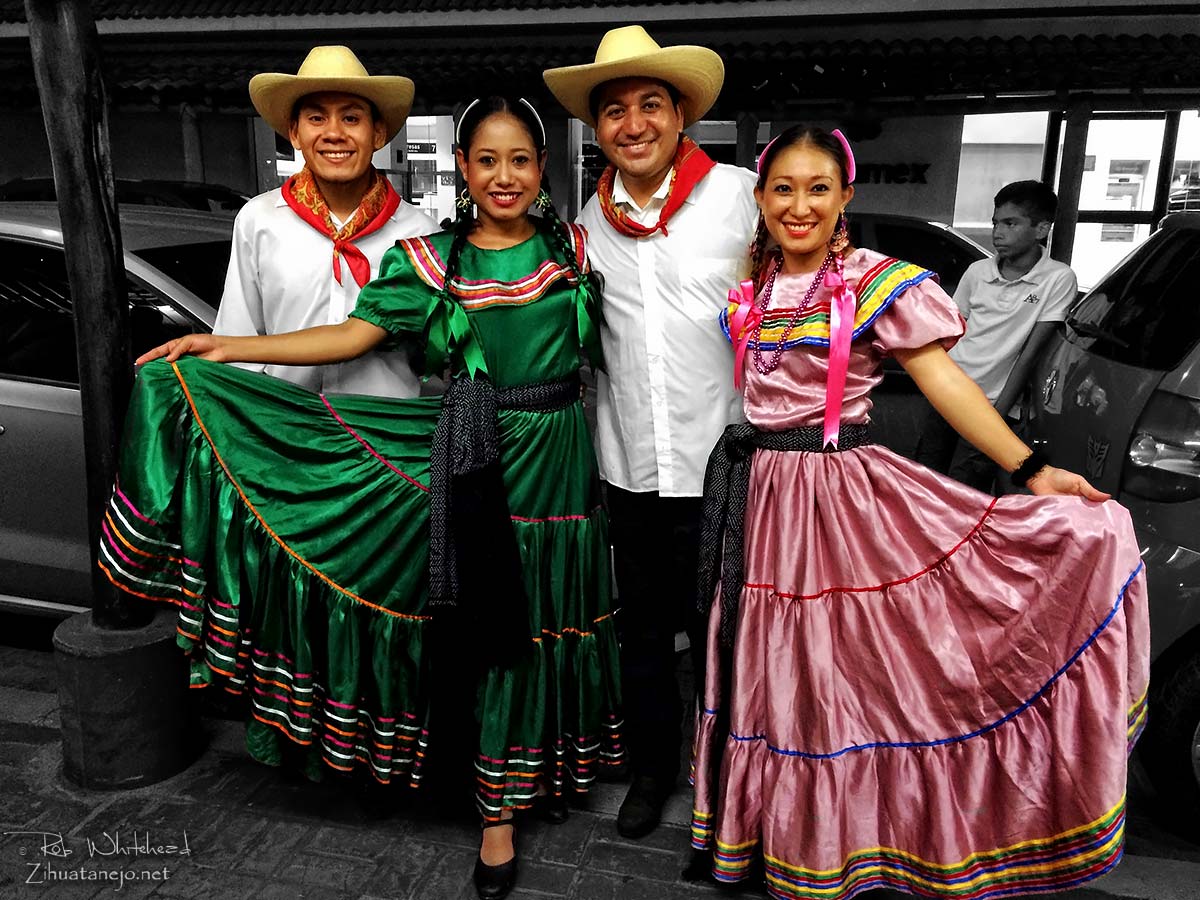 These are some of the local folkloric dancers we enjoyed watching one evening at "Restaurante Any" in downtown Zihuatanejo. They work hard to help keep part of our traditional culture alive. Please be sure to tip them well if you see them perform. 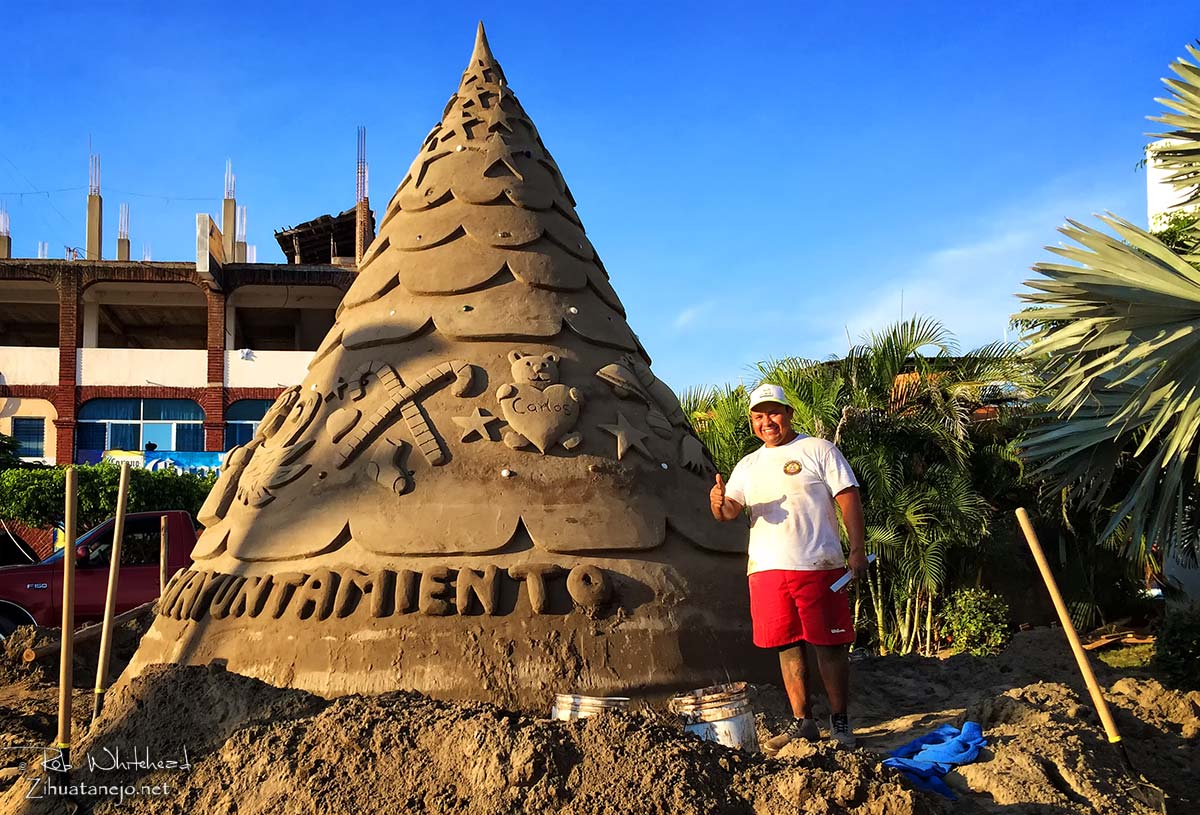 This is local sand sculptor Daniel Fermín. He works his magic on our beaches and in the local plaza, such as the Christmas Tree he is making here. Please tip him generously if you see him with his incredible creations. 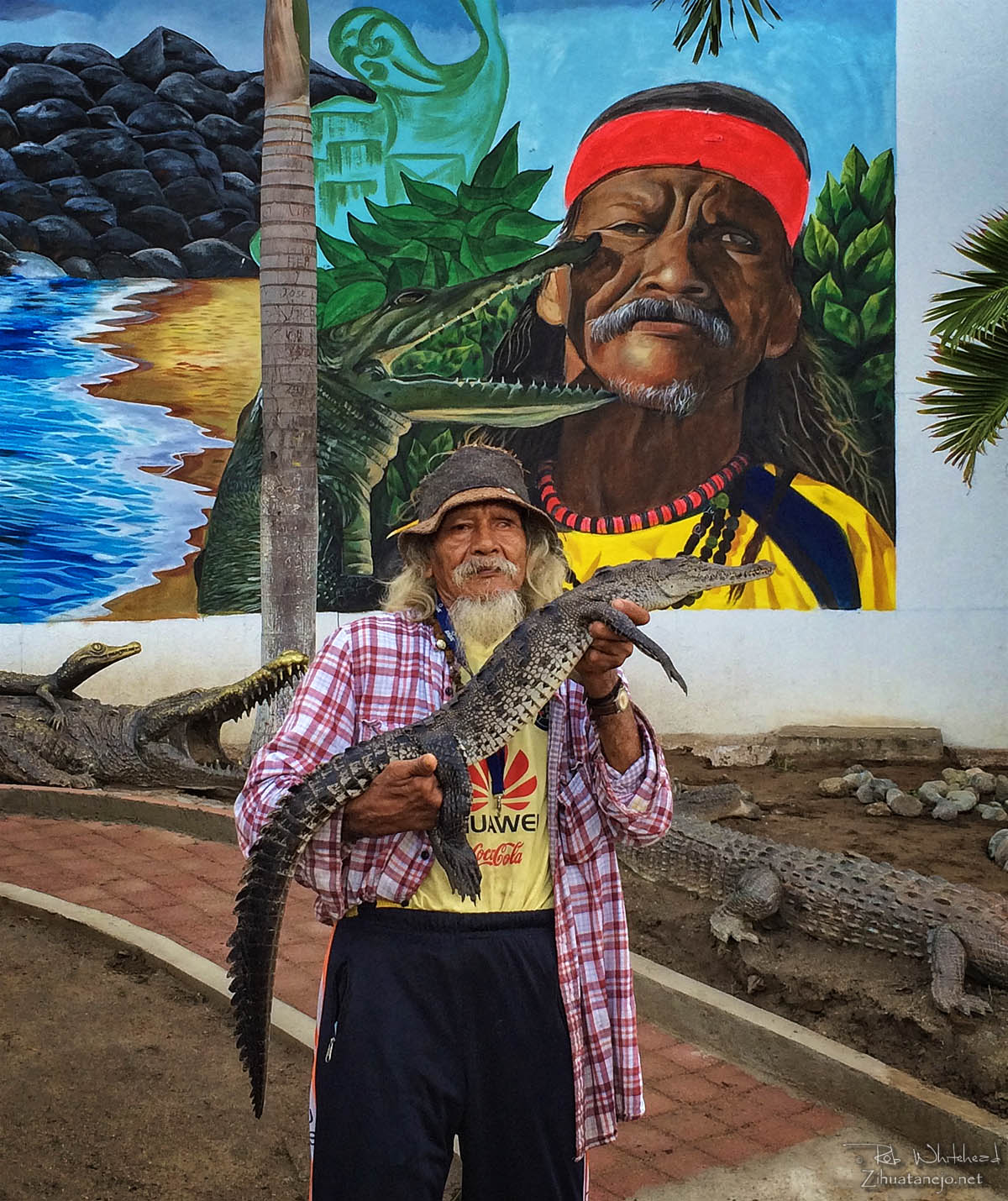 Local croc wrangler Roberto Piza Ríos aka Tamakún of song and legend in front of a mural dedicated to him in Zihuatanejo's main plaza. He still works for tips making a show of feeding the fenced-in crocodiles at Playa Linda.

This is Don Juan Sacristán Matador, "El Frutero Costeño". Don Juan can be found early each morning along the waterfront of Zihuatanejo with his delicious fresh fruit for sale. He works very hard and sells produce and fruit of excellent quality.

A coconut grove is called a "huerta de cocos", and along the Costa Grande of Guerrero there are many that seem endless, stretching off into the horizon like this huerta looking from La Chole near San Jeronimito towards Cerro de Guamilule at Barra de Potosí.

Local artist Miguel Ángel Álvarez Lozano, known as "Gitano" made this beautiful mural in the Plaza del Artista along the waterfront in Zihuatanejo. Unfortunately the city has not maintained the plaza or the mural and today both are severely deteriorated. 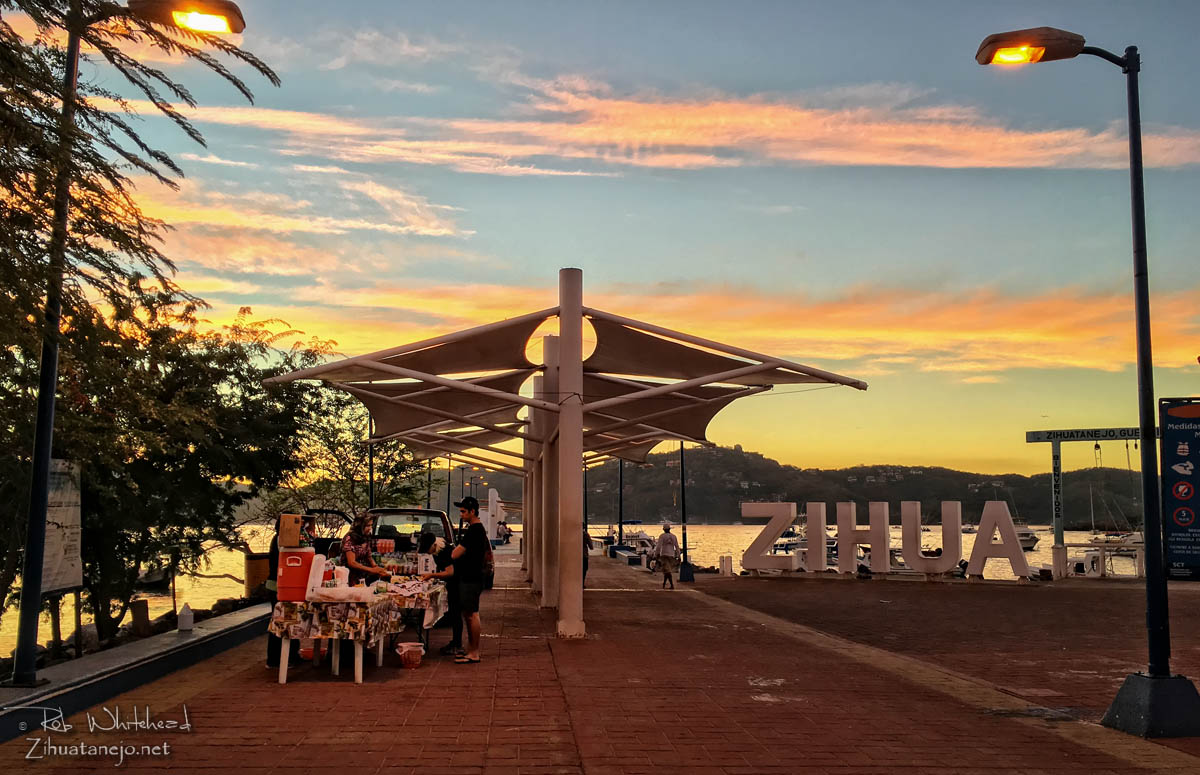 During the early morning at the Zihuatanejo Municipal Pier you can buy fresh-baked pastries, stuffed bolillos, and café de la olla from vendors there and enjoy watching the sun rise with all the morning activity. 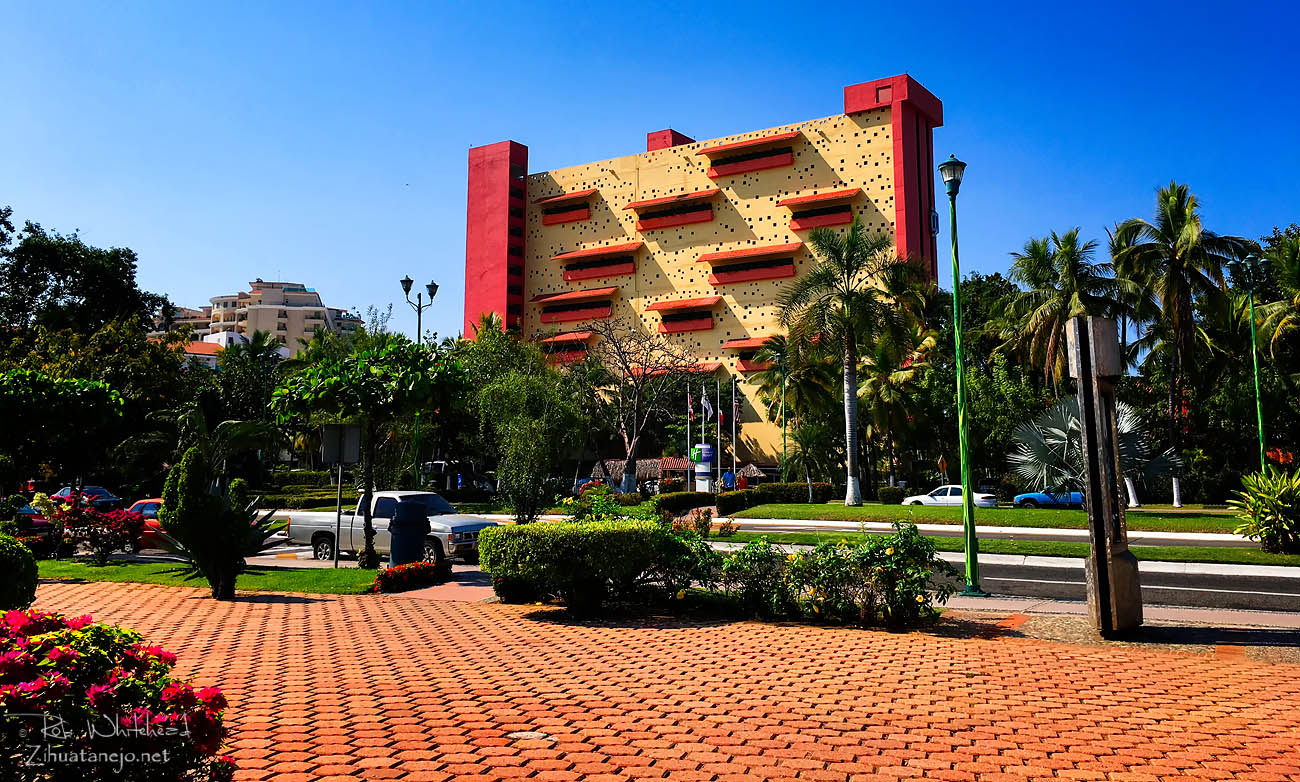 This is one of the first hotels built in the government's planned development we know as Ixtapa. For about 3 decades it was the Hotel Presidente until changing hands in 2015 and becoming the Holiday Inn. 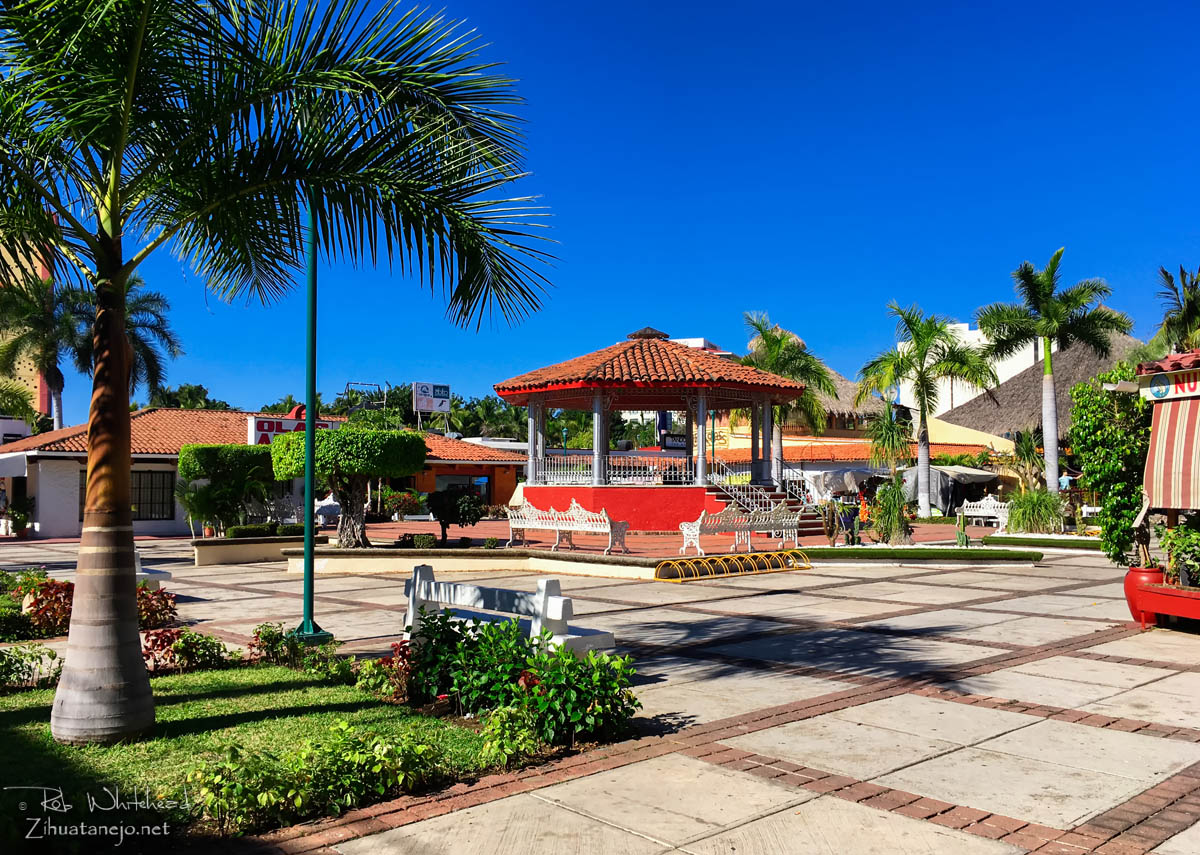 This is the gazebo in the Plaza Zócalo of Ixtapa's "El Kiosko" shopping center where you'll find many nice restaurants and fine shops. 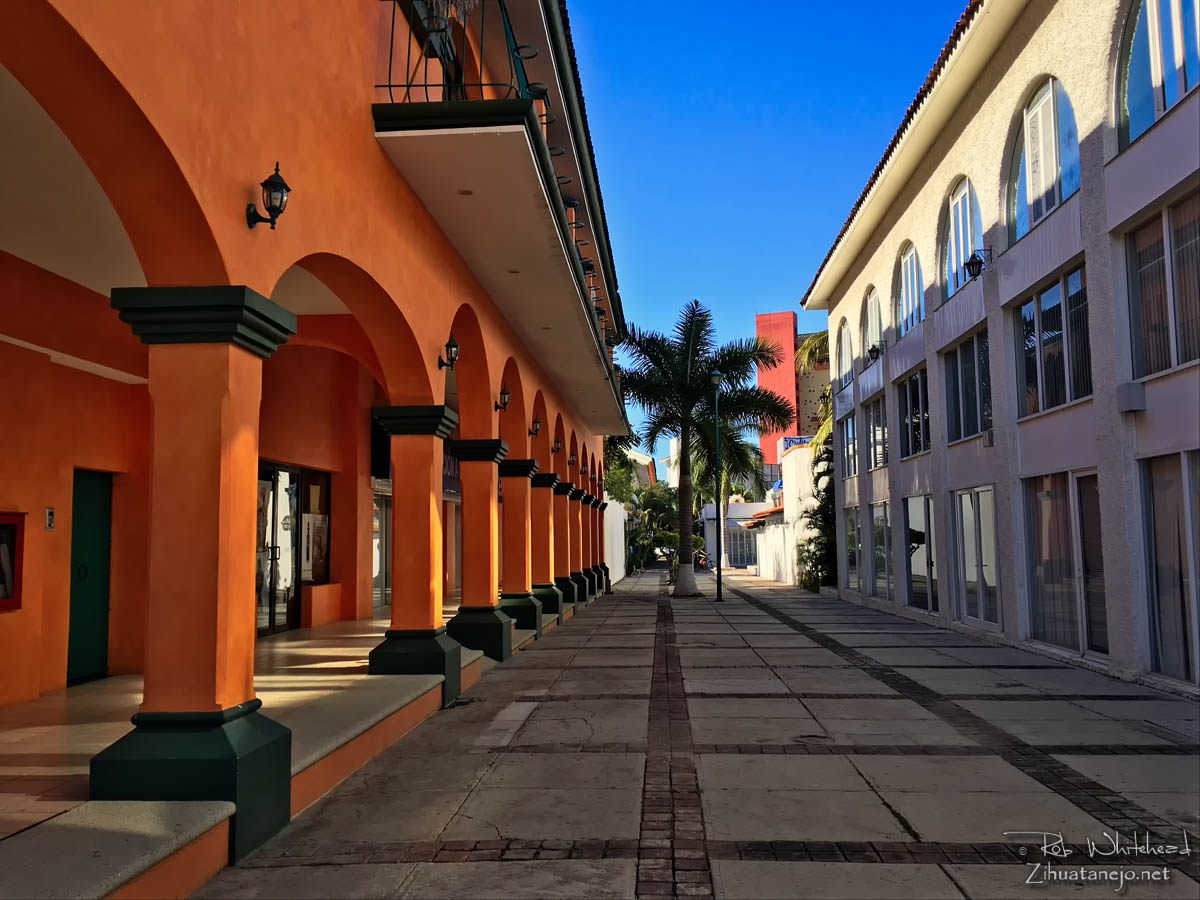 This is the walkway behind the Cinema Flamingo between Plaza Ixpamar and Plaza Zócalo in Ixtapa's shopping area. 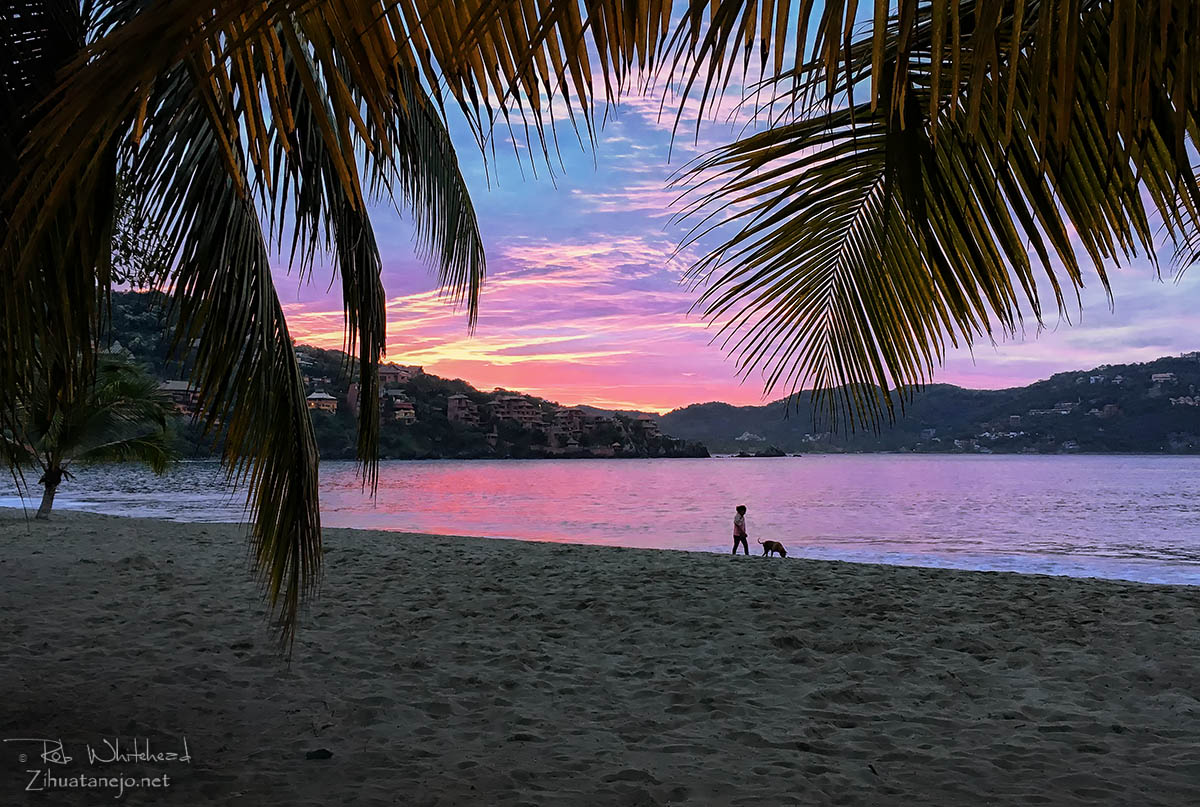 An idyllic morning scene on Zihuatanejo's Playa Principal, the downtown beach, as a woman takes a stroll with her dog. 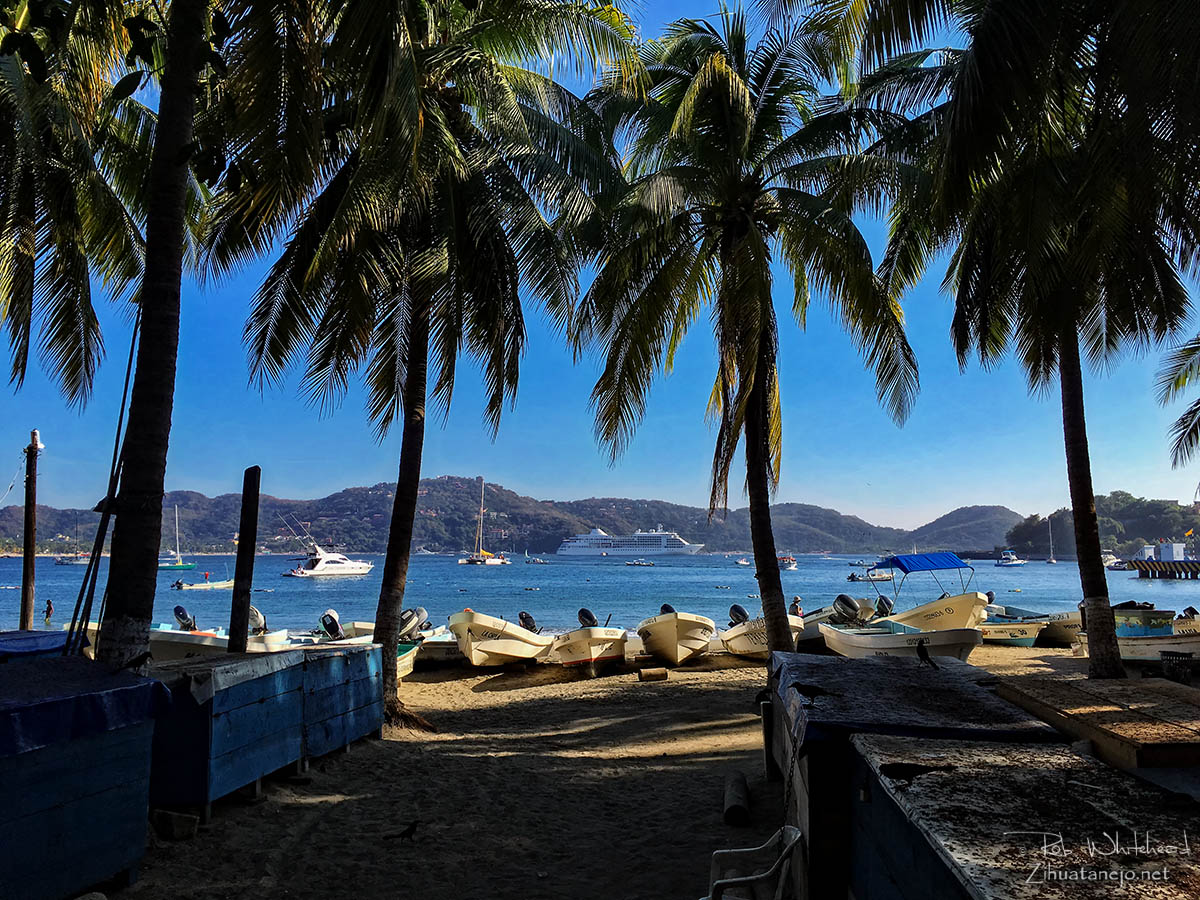 Sometimes we get visits by passenger cruise ships. This was the "Silver Whisper" anchored in Zihuatanejo Bay on the last day of 2016. 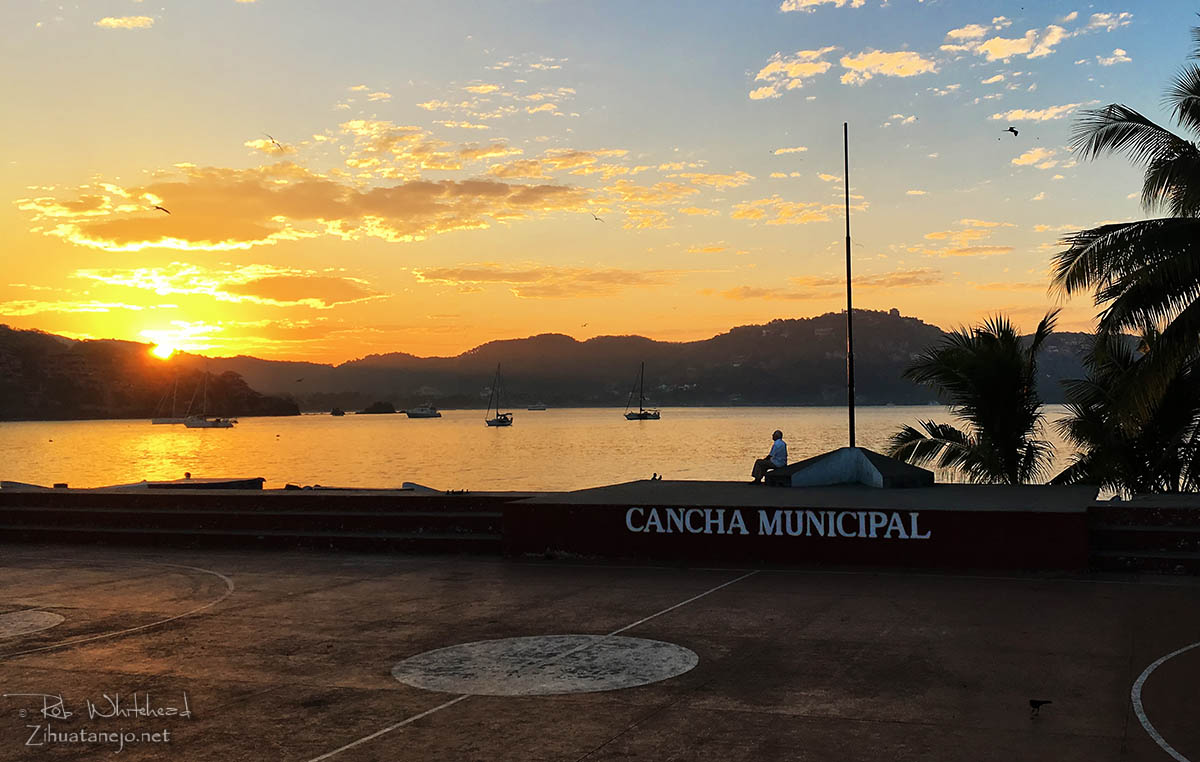 An older gentleman relaxes to enjoy watching the sun rise over Zihuatanejo Bay from the Cancha Municipal. 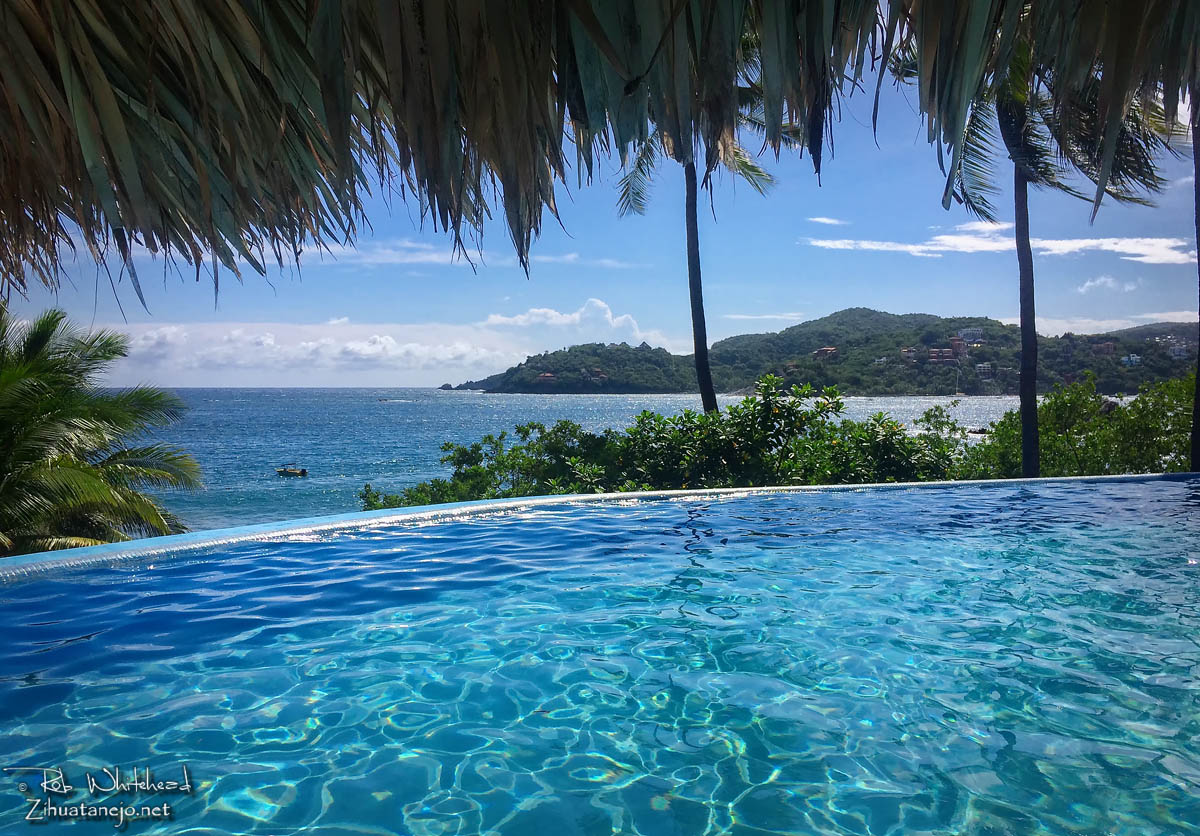 Here's a view from the hillside pool at the Catalina Beach Resort Hotel looking west in Zihuatanejo Bay at high noon. 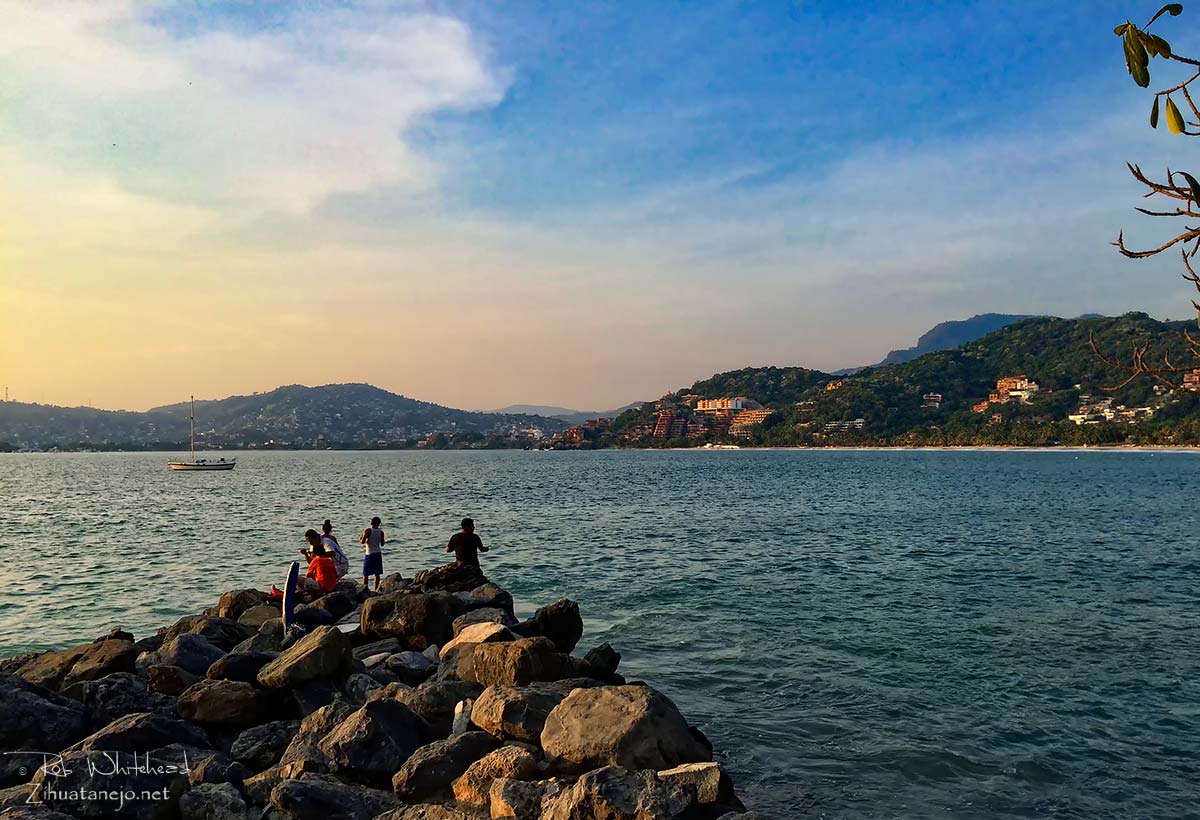 Some young men fish from the rocks in front of Capricho del Rey in Zihuatanejo Bay. Downtown is visible in the distance to the left and La Ropa Beach to the right. 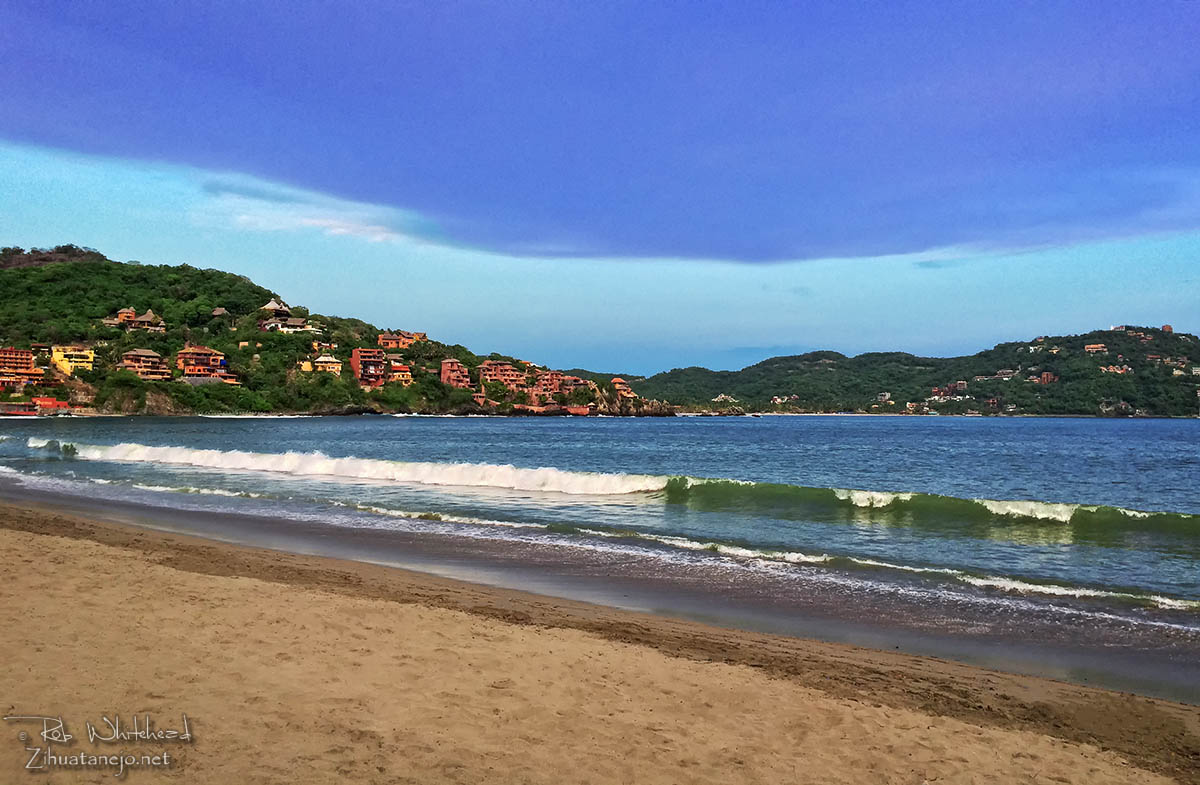 Calm gentle waves are common at Playa Principal in the afternoon. La Ropa Beach is visible in the distance. 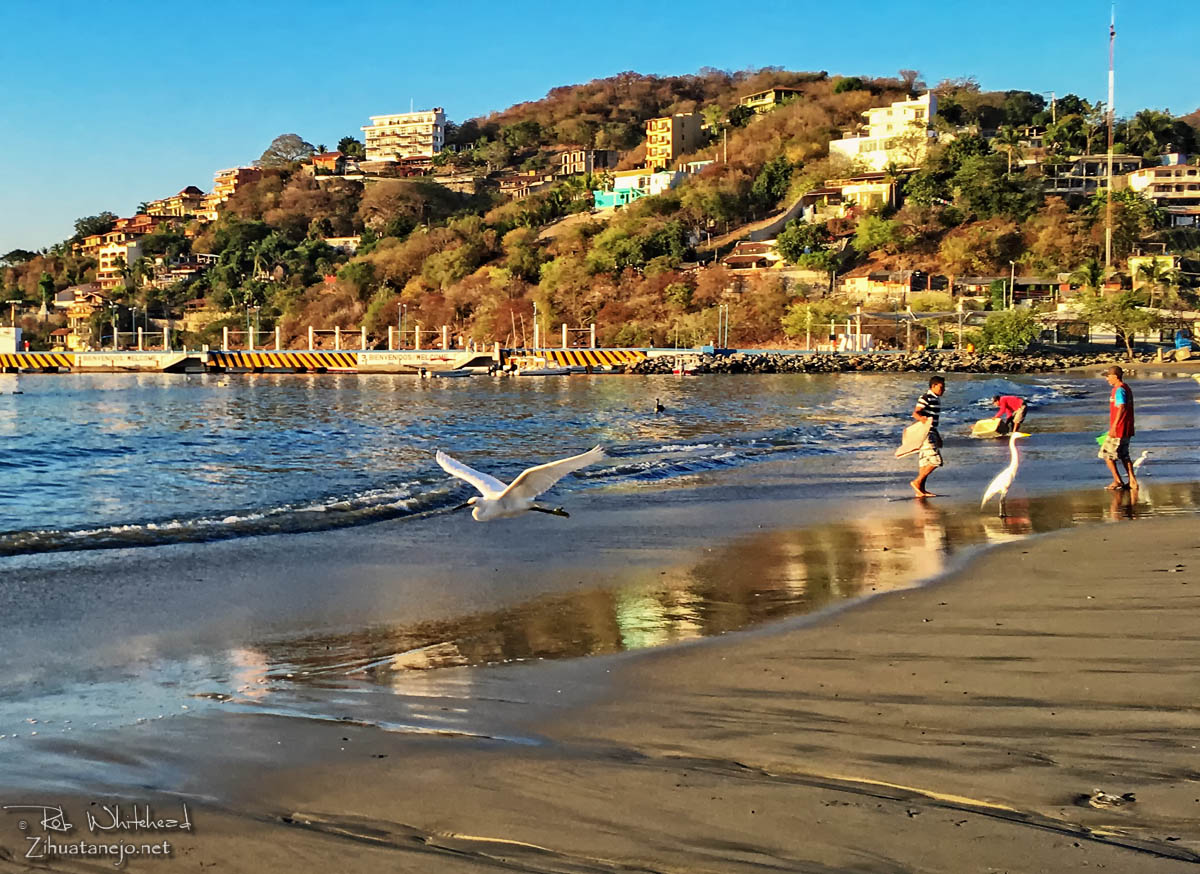 A snowy egret flies away while a great egret walks among fishermen on Playa Principal in Zihuatanejo. The municipal pier is visible in front of El Almacén Hill. 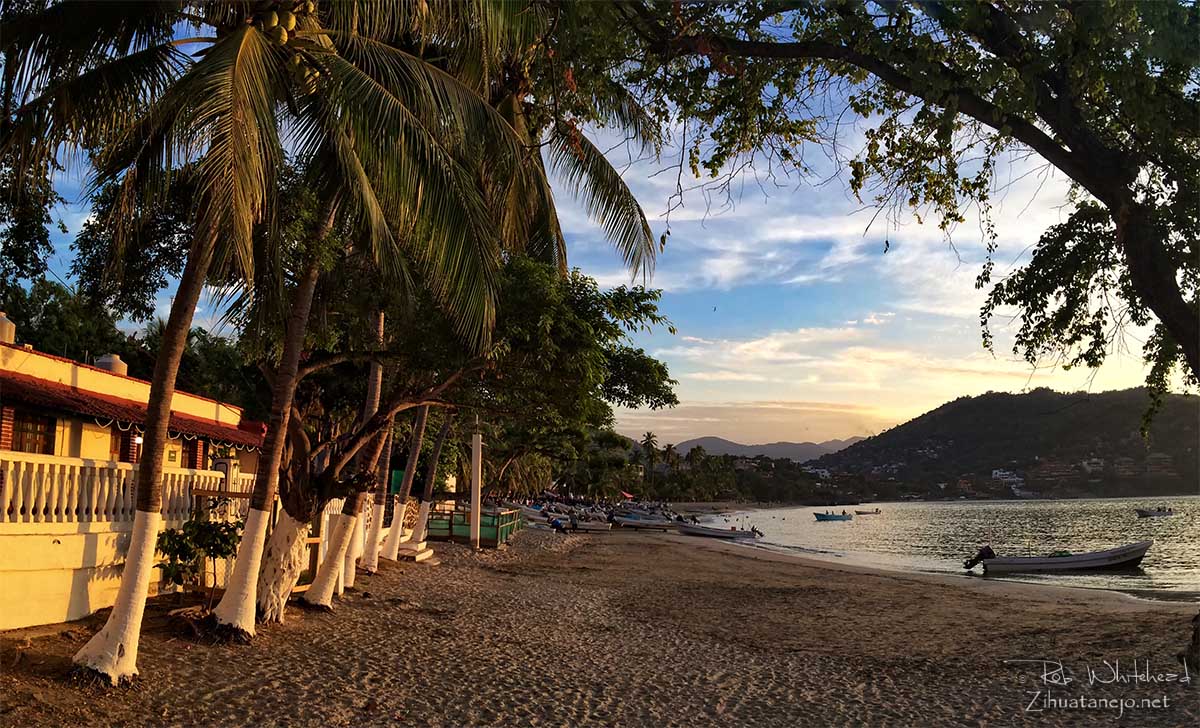 Here you can see the beach side of the offices of the Sector Naval including their sea turtle egg pen where they protect the eggs until they hatch. Local fishing boats can be seen down the beach. 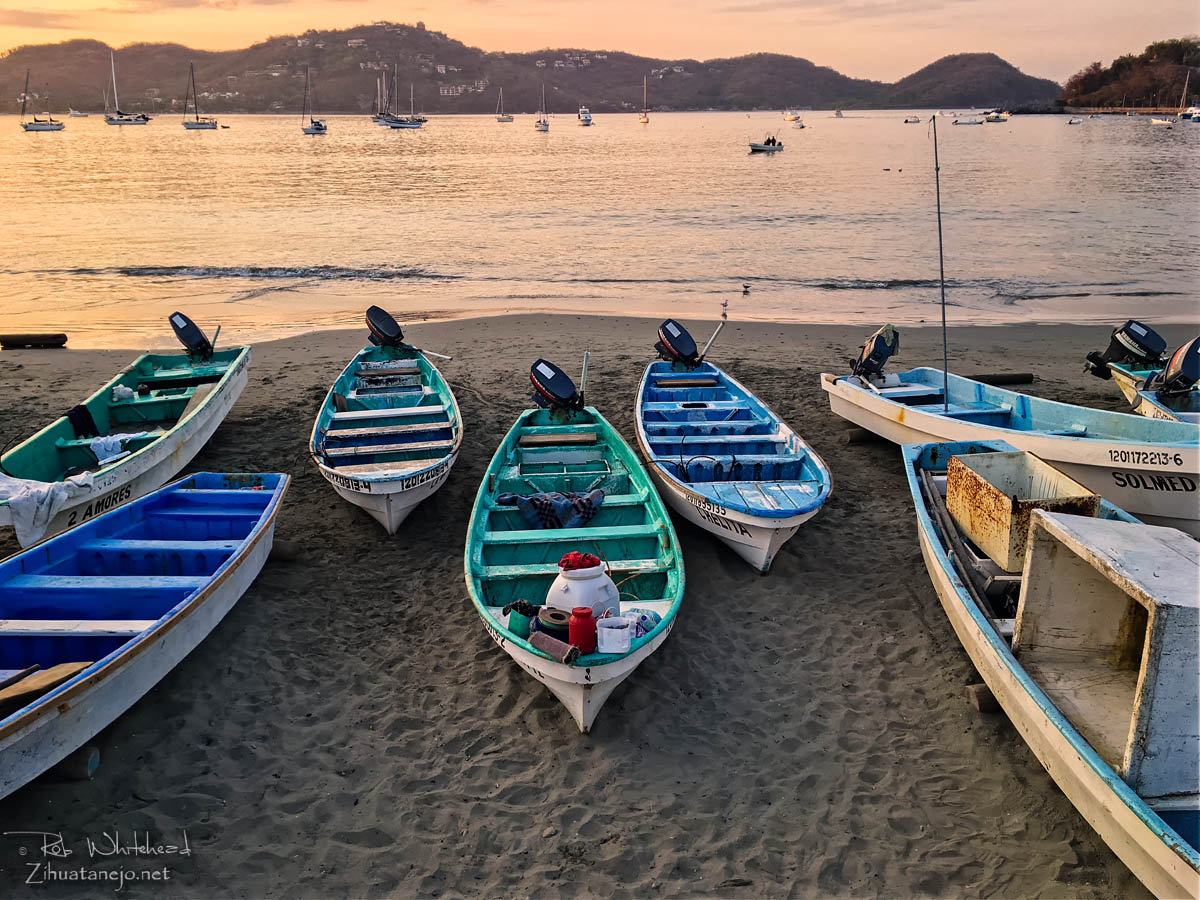 Local fishing boats are known as pangas. Local commercial fishermen mostly fish the local seamounts just off the coast during the night, selling their catch on the beach in the morning.

Many local fishermen beach their boats on the downtown beach to offload their catch. Some are kept on the beach and others are moored in Las Salinas Lagoon. 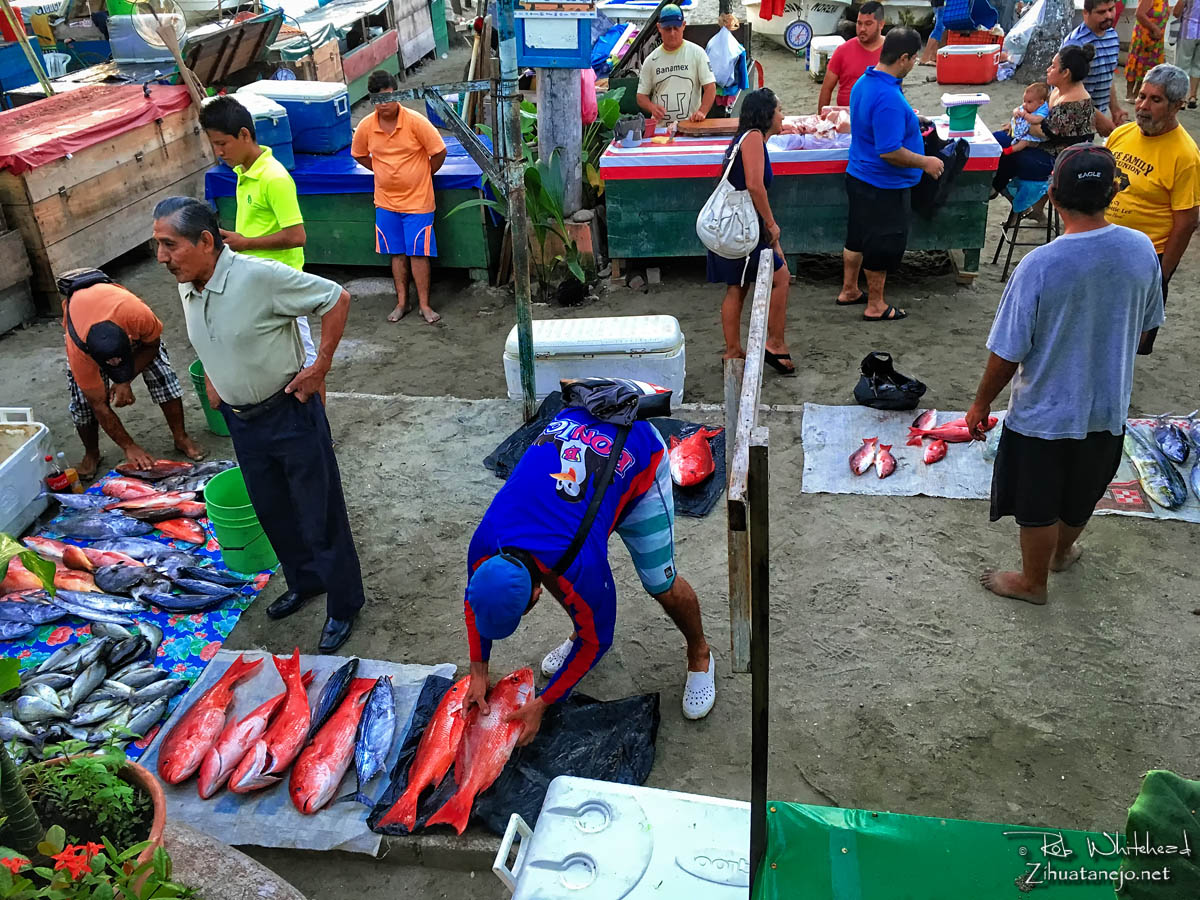 If you get to the fishermen's market on the downtown beach early in the morning you will find the fishermen displaying their overnight catch to sell. 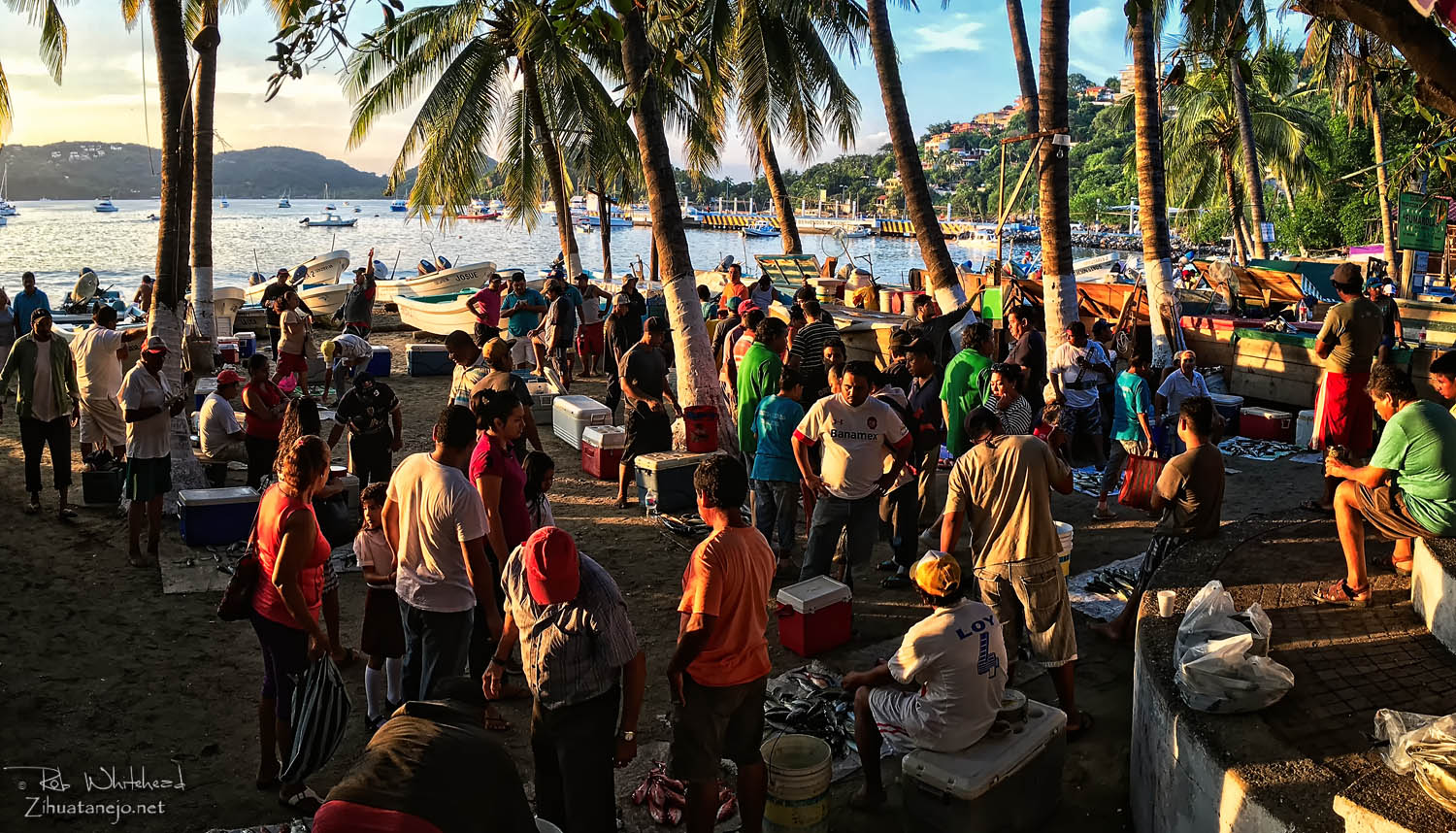 Some days the variety of fish and the sizes of the catch are better than others, depending on the weather and the time of year. 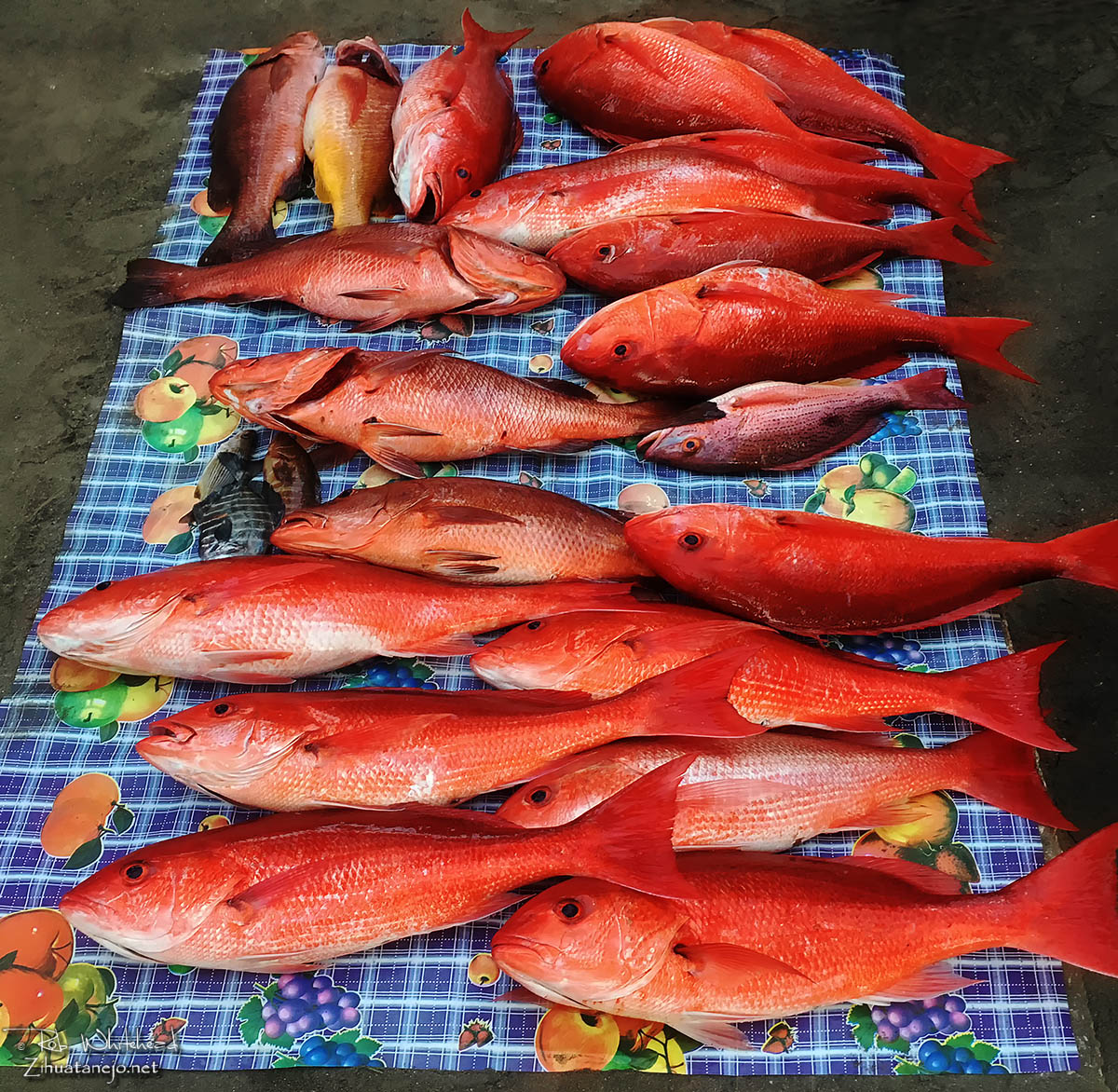 Red snapper and other fish for sale at the fishermen's market on the downtown beach in Zihuatanejo at daybreak. 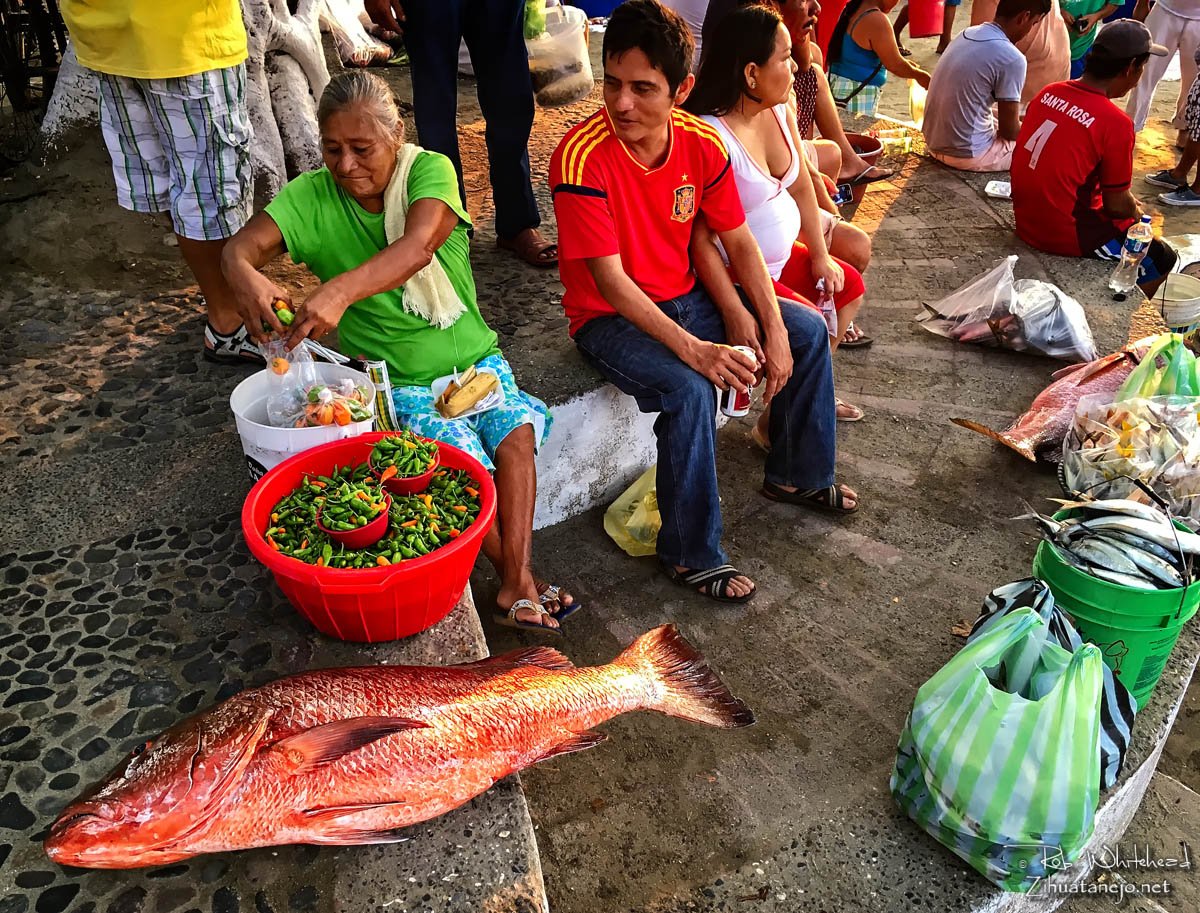 The larger red snapper is known as pargo rojo. The fishermen's market is a popular place in the mornings. Chili peppers anyone? 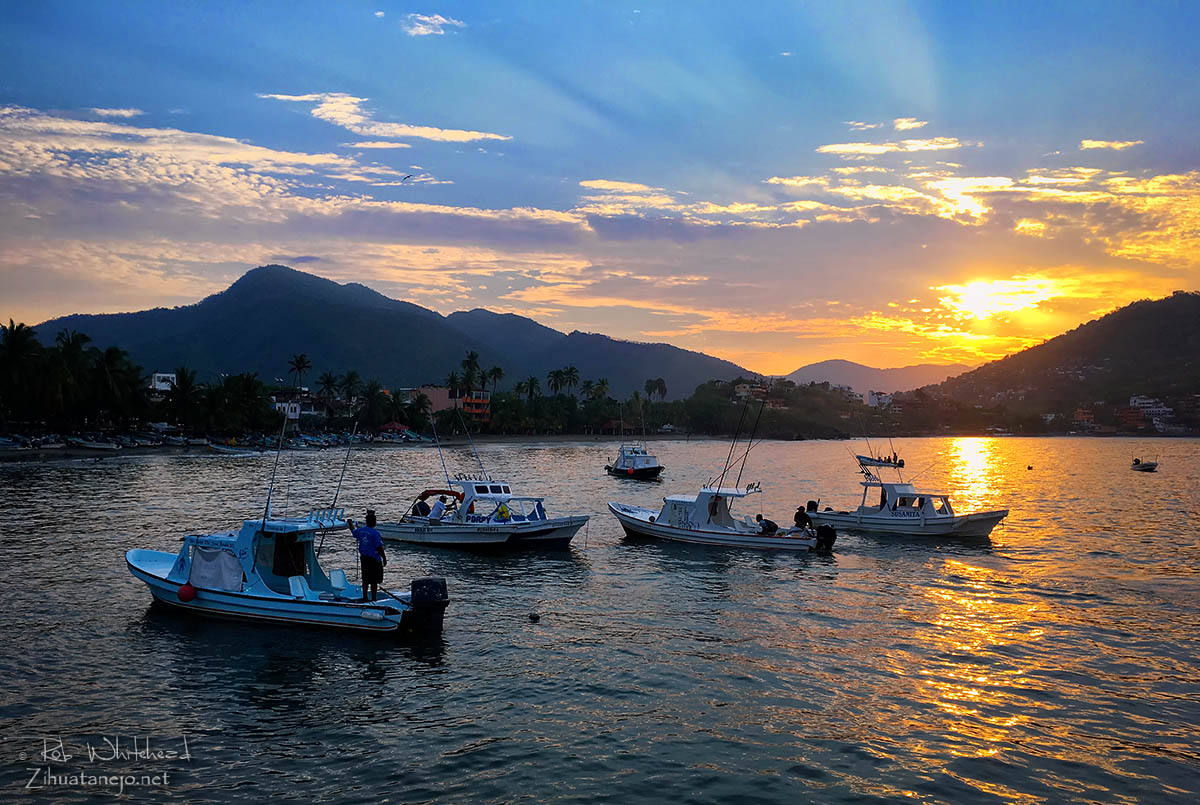 Many of our local pangas are used for fishing while others are used for water taxis to take people to and from Las Gatas Beach. Some are open and some have roofs. 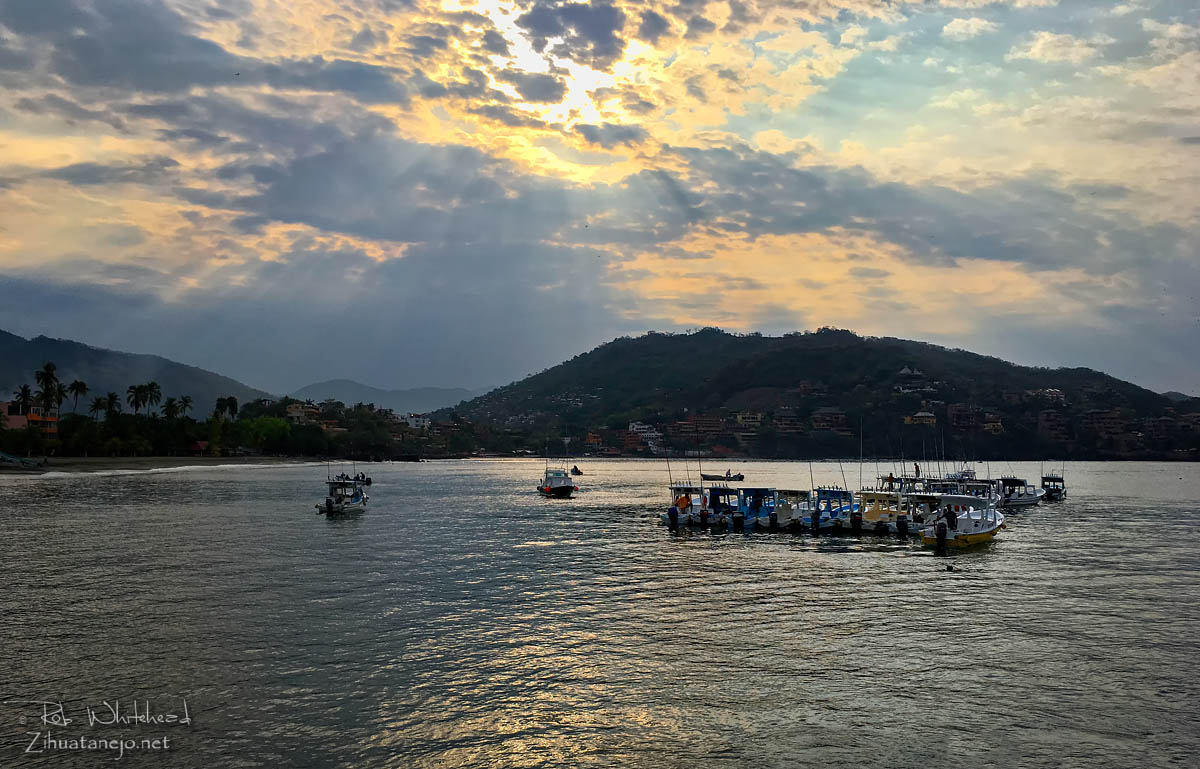 Water taxis line up near the municipal pier in the morning, ready for a day of ferrying people to and from Las Gatas Beach across Zihuatanejo Bay. 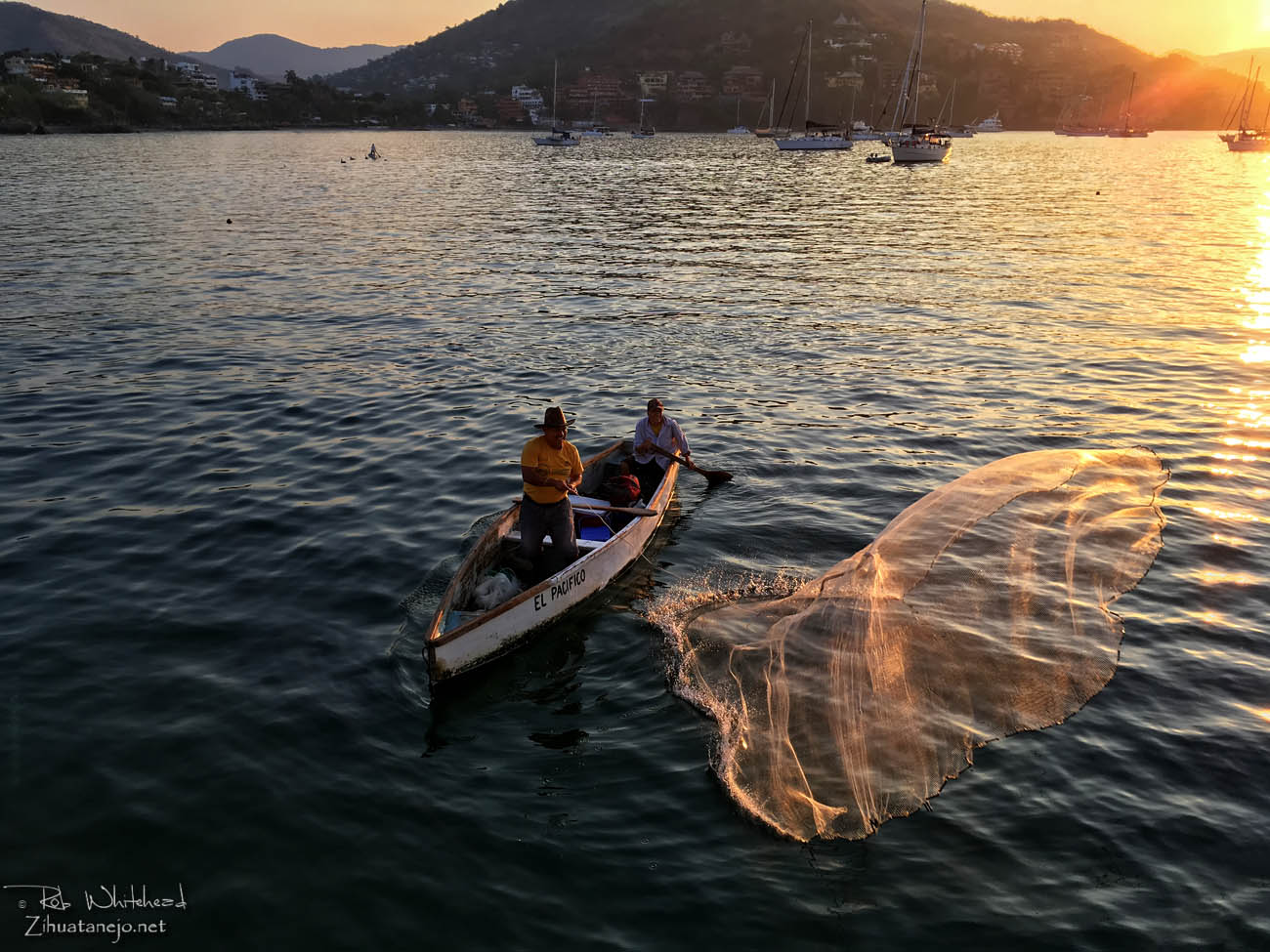 In the morning it's common to see fishermen working in Zihuatanejo Bay. Some seek baitfish while others seek their own daily sustenance. 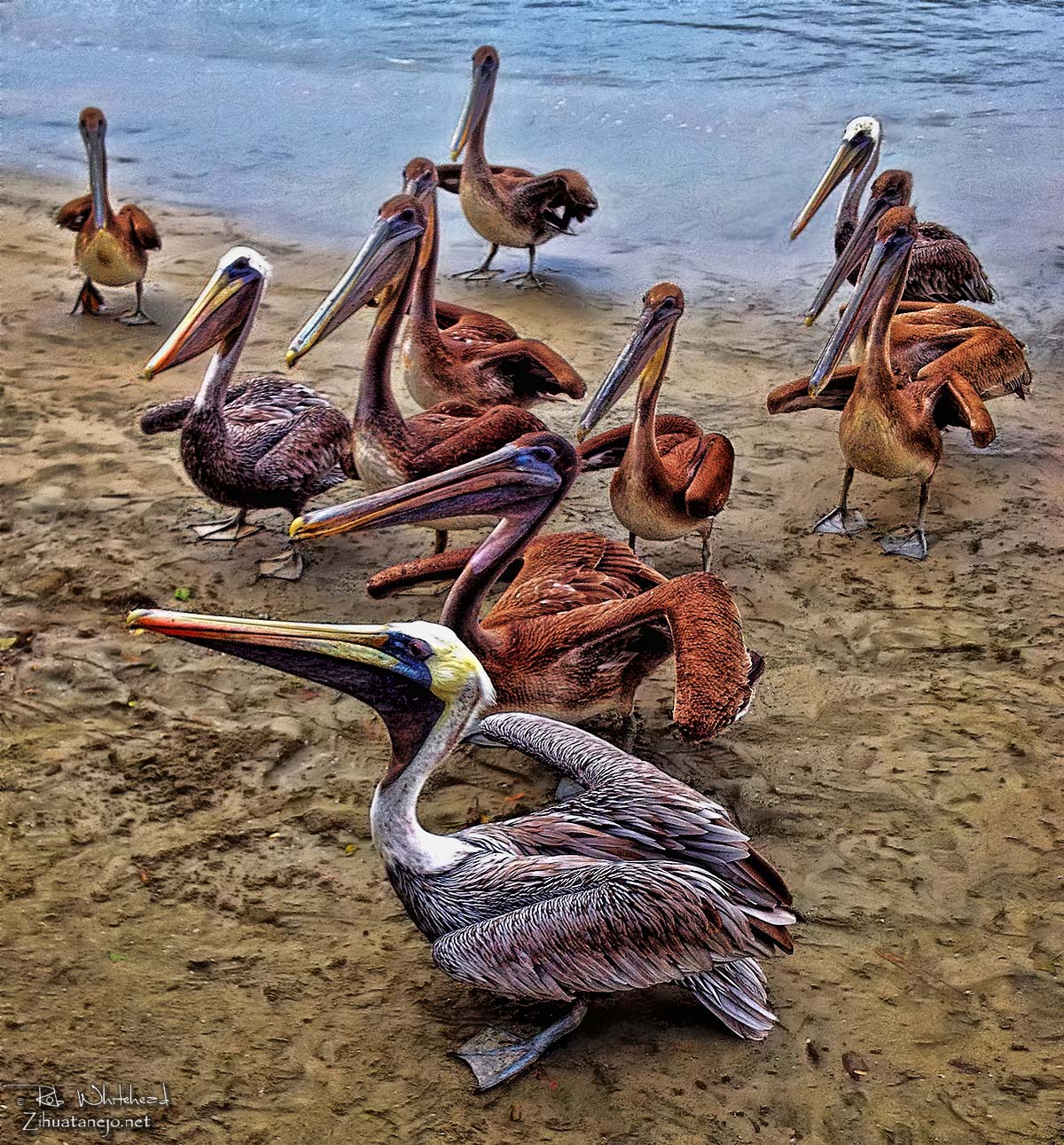 Pelicans are a common sight on our beaches, especially wherever there are fishermen. 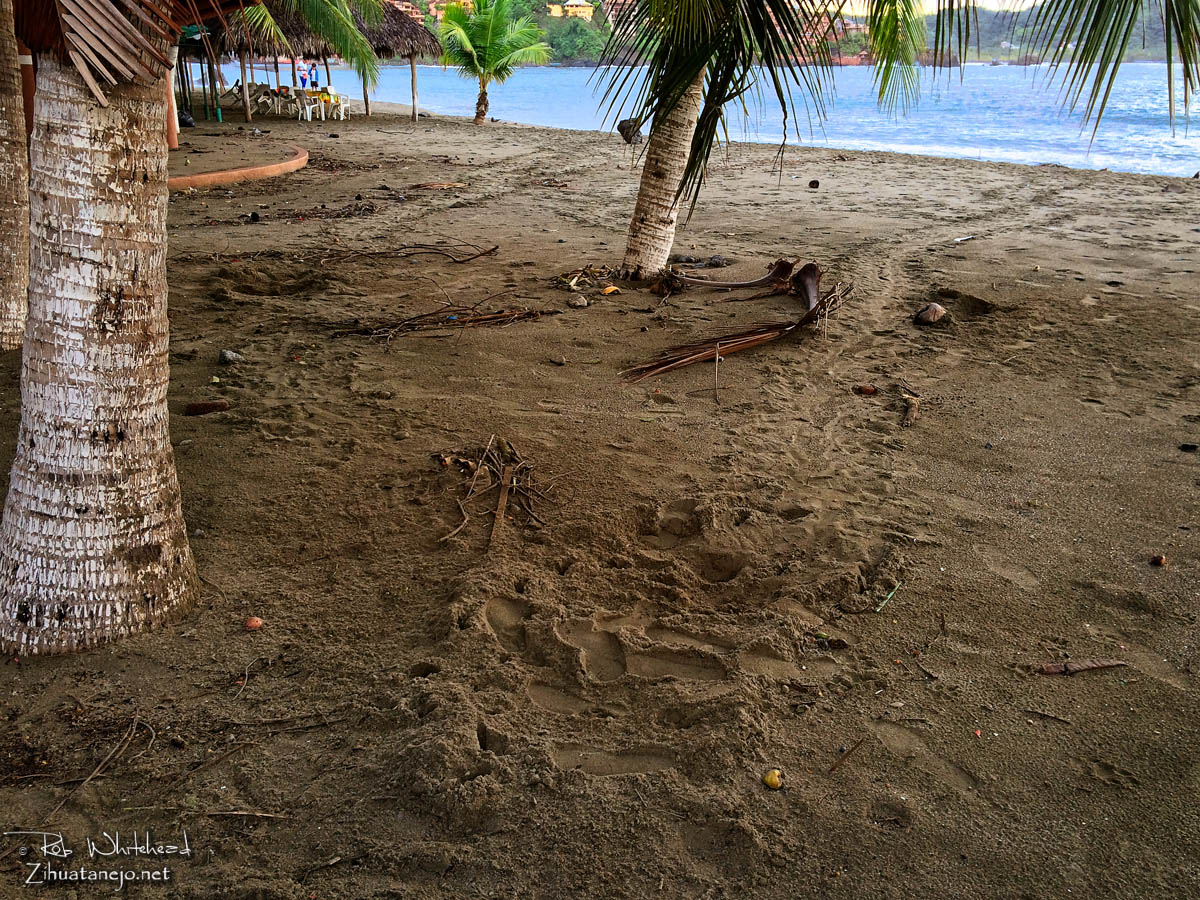 Sea turtle tracks are a common sight on our beaches. Theft of their eggs is a problem, but there are many people dedicated to saving and protecting them until they hatch. 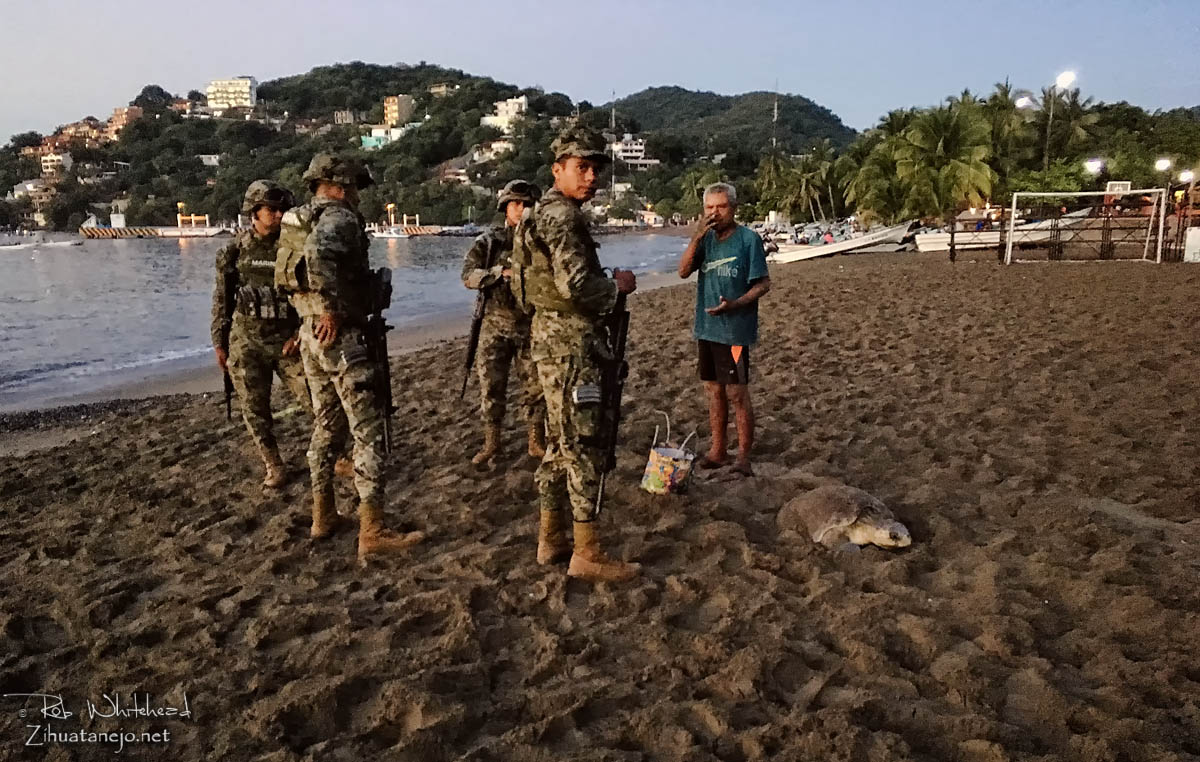 The Marinos from the Mexican navy patrol the beaches in the morning to protect sea turtle eggs from poachers. They collect them and bury them in a safe place until they hatch. 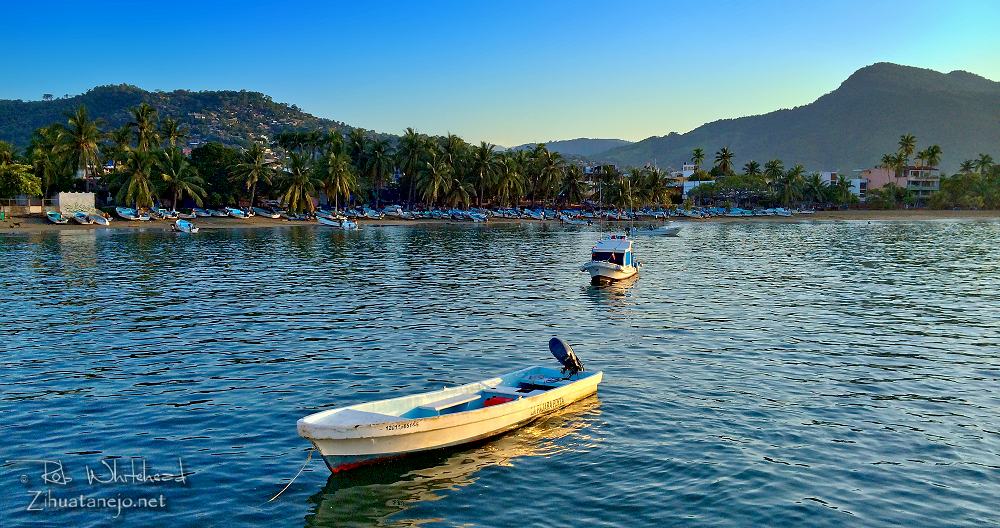 Pangas sit in the calm waters of Zihuatanejo Bay in front of the downtown beach. El Cerro Viejo is the hill in the background. 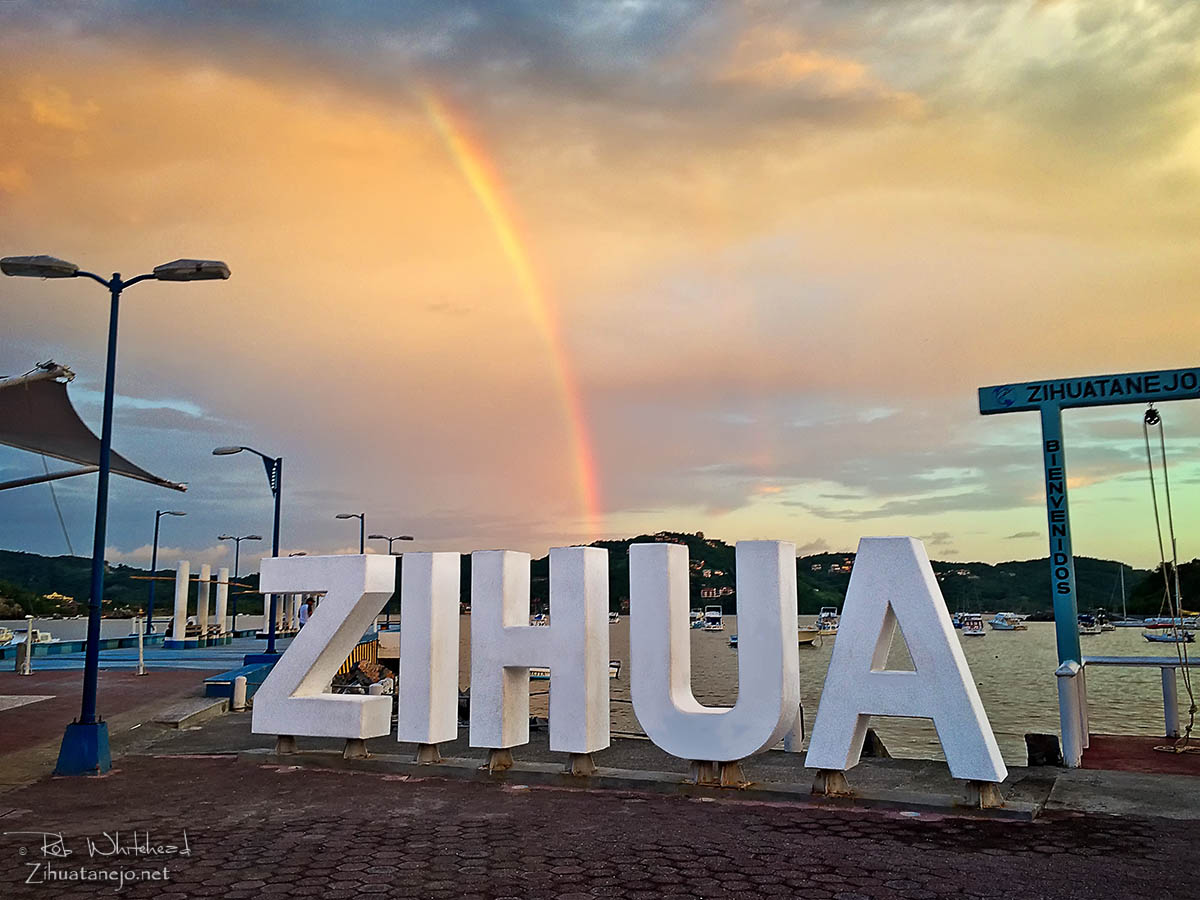 A rainbow over the Zihua letters at the pier makes for a magical scene.
close
visits since 16 OCT 1999
©1997- ZihuaRob's ® ALL RIGHTS RESERVED (Privacy Policy)
This website is provided as a community service by ZihuaRob's