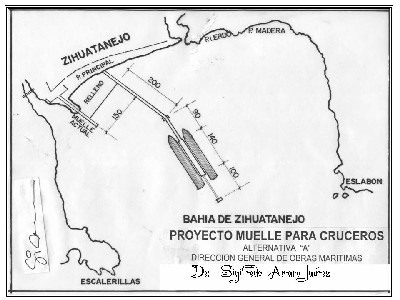 This appeared in one of our local newspapers today. This project would remove all the fishing boats from the beach, take up about half the beach, fill in the area between the two piers, and require some serious dredging right through the center of the bay almost to the beach. Our mayor appears to have betrayed us and has joined in the name-calling of our civic front as well as signalling me out personally for "disinforming" and "scaring off" our foreign visitors. He also stated that there are 3 optional plans for the pier, this being one of them, another being at Playa Larga, while the third he refused to make known for whatever excuse, stating that by the middle of this month it will be made known publically.

Personally I wonder if he, like the tour operators, is simply pissed because we are interfering in their plans to make themselves a lot of money. Sounds like they are sucking sour grapes to me. I am still confident that the Director de Puertos for the SCT knew what he was saying when he replied in his letter that he knows the construction of a pier in Zihuatanejo's bay is not possible. Damn straight it's not because we won't allow it!